This event comes together seamlessly, every year, thanks to SGE (Synergy Global Entertainment) and Brew Ha Ha (check out Season 1, Episode 7 of the podcast for more about these guys). The main sponsor of this event is Gringo Bandito Hot Sauce owned by Dexter Holland of The Offspring, and that stuff is everywhere! A complete list of partners, sponsors, and charities can be found on Sabroso Festival’s website. These sponsors pulled off one of the best events of the season. From music, to beer, to tacos, to lucha libre wrestling - it all came together perfectly. 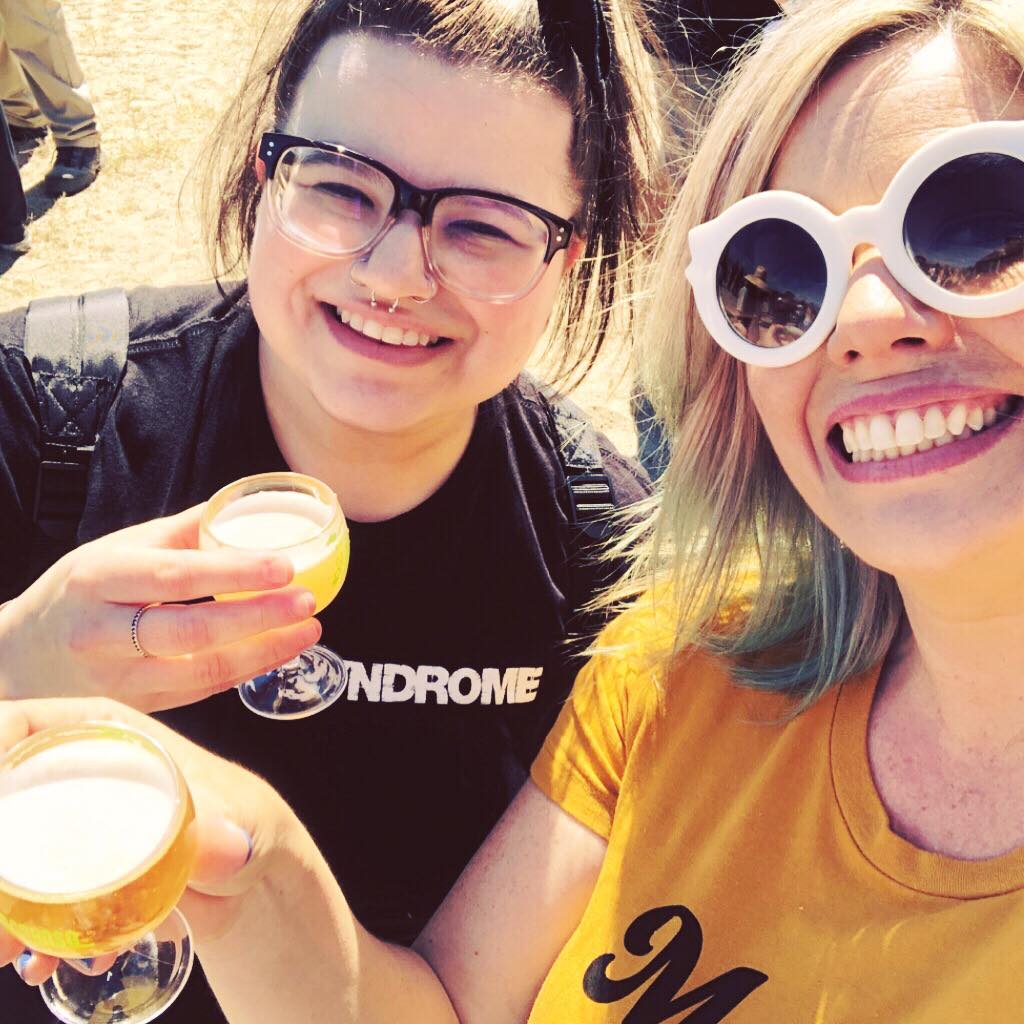 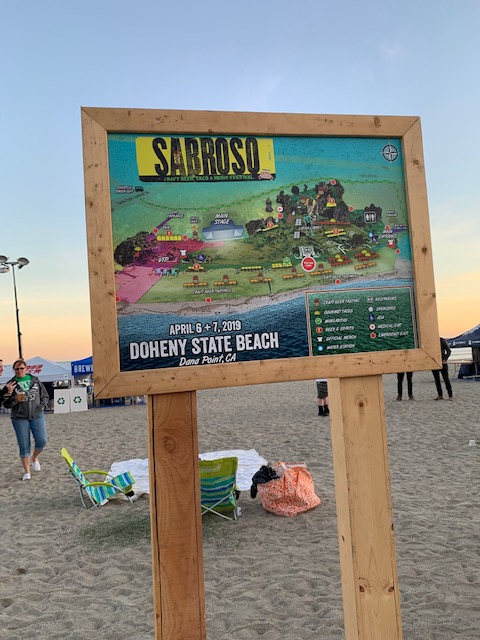 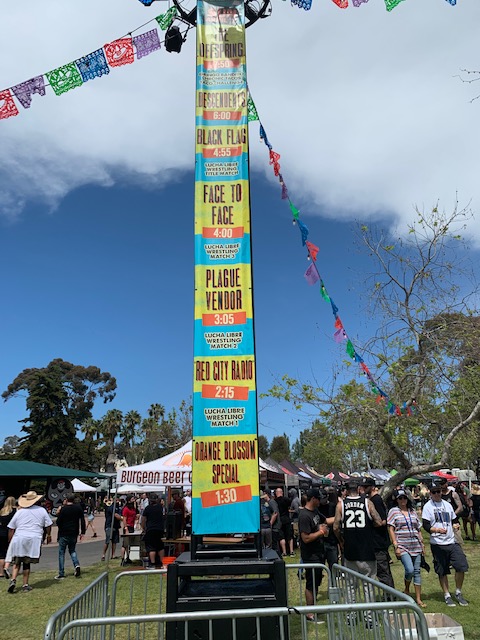 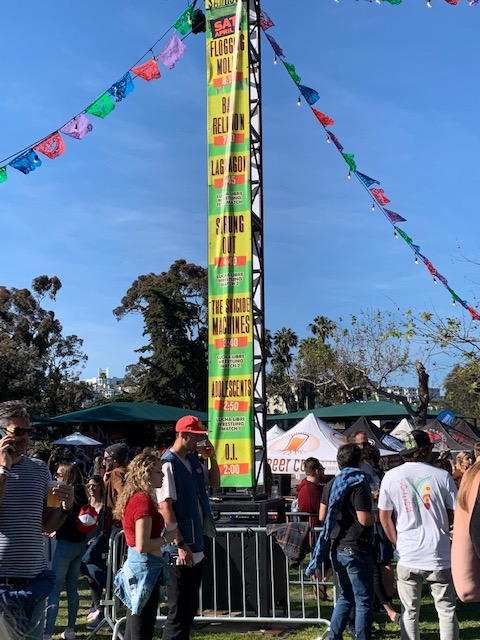 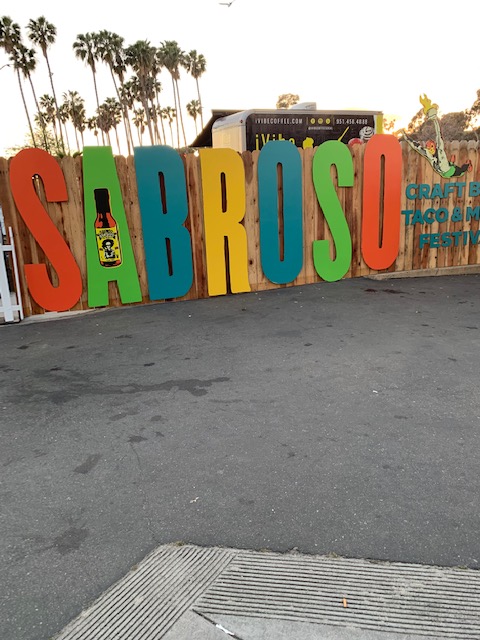 Between band performances, theatrical and exaggerated Lucha Libre matches took place. These matches were not to be missed, quite possibly being every wrestling fan’s dream. Wrestlers in tight bodysuits, adorned with sequined masks, conjure images from Nacho Libre. It was hard to resist picking a wrestler to root for, and feeling like a part of the match. 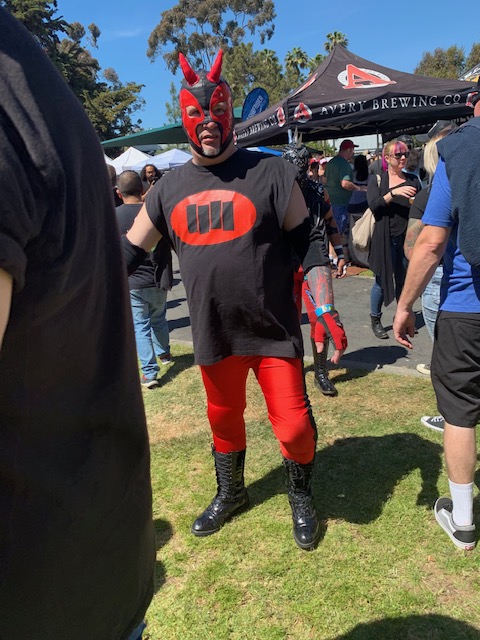 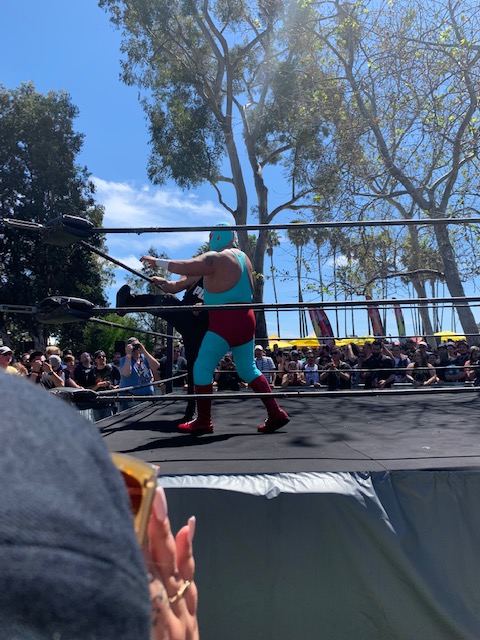 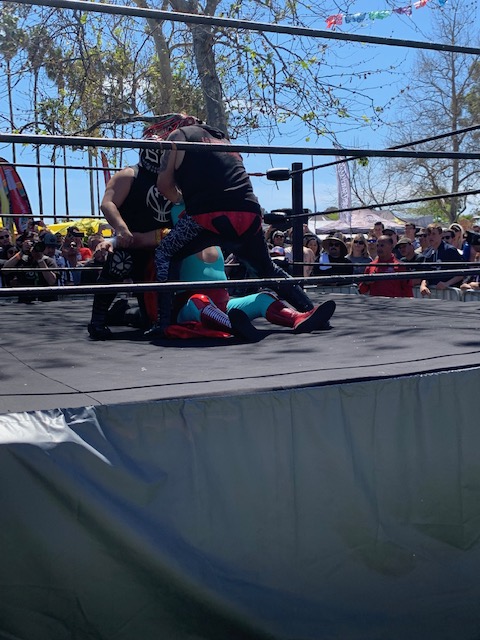 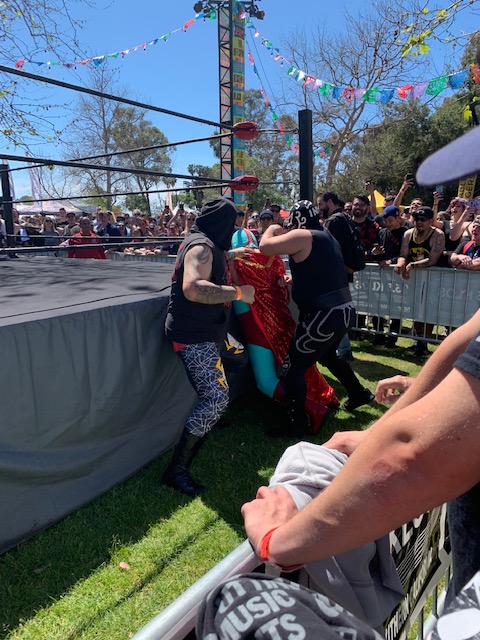 With over 150 craft beers to taste and a limited amount of time to do it, it's best to have a good game plan (which should include taking breaks for tacos). Many of the breweries are local to California. It's a great opportunity to try beers you might have never seen or heard of previously. Many breweries brought different varieties on day two. There was something for every one.... at least in the over 21 crowd. My personal favorite of the weekend was Ace pineapple craft cider. Click HERE for a full list of breweries. If beer's not your thing (or if you needed a caffeine boost), various flavors of Rockstar Energy drinks were given out free of charge, including Kiwi Strawberry, Green Apple,Cotton Candy and Peach Iced Tea. 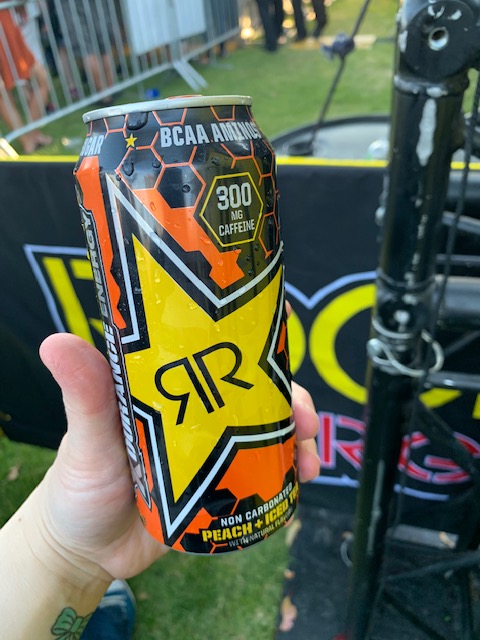 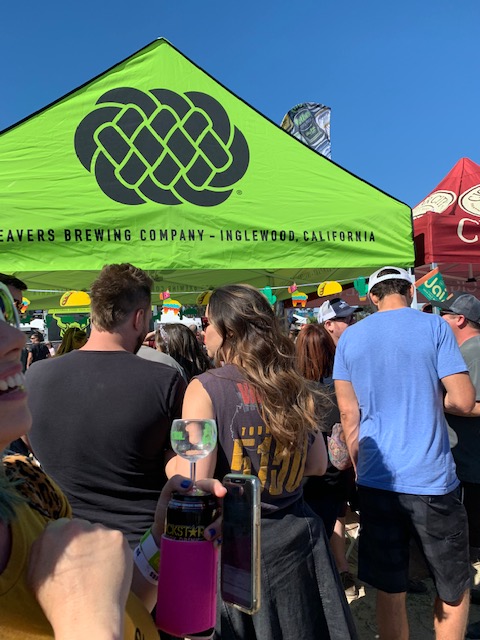 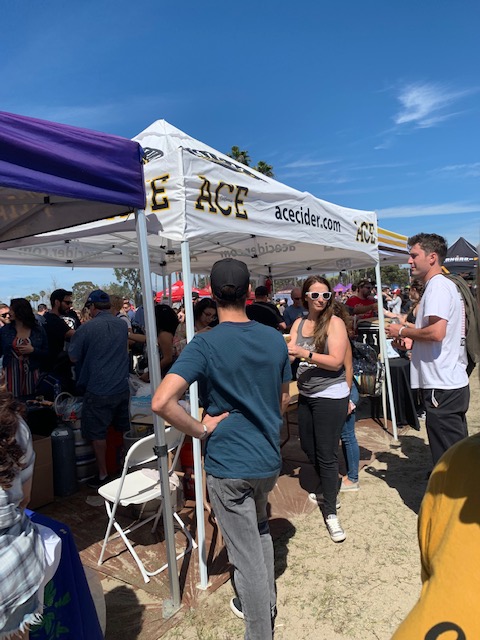 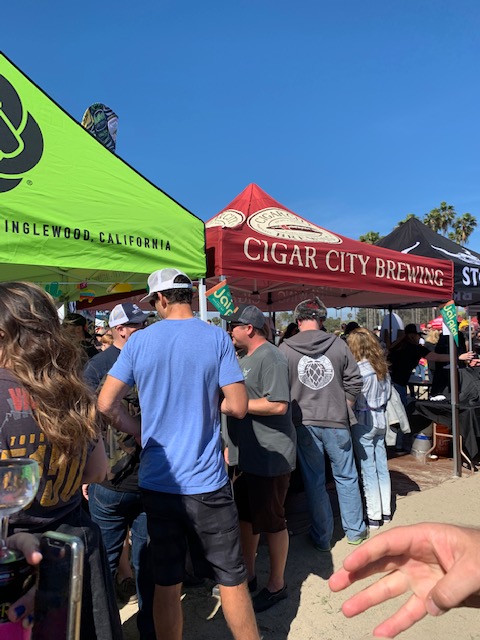 The Sabroso merch tent offered various tee shirts, hoodies, and accessories from most of the bands on the roster. There was no shortage of merch options, especially for fans of The Offspring. Hooligan was there with their iconic skateboards; Garageland brought a variety of posters, and hosted a meet-and-greet with Face to Face. Many other vendors were also present, fully stocked with inventory to sell to eager masses. 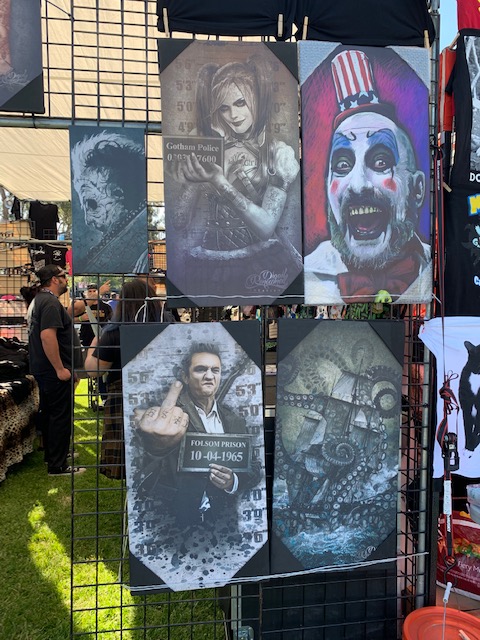 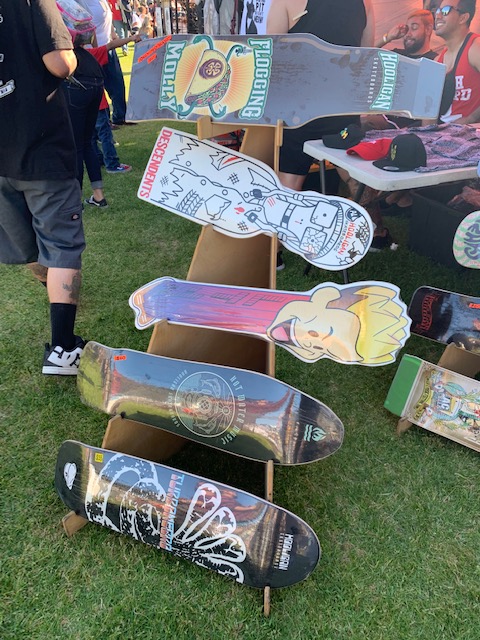 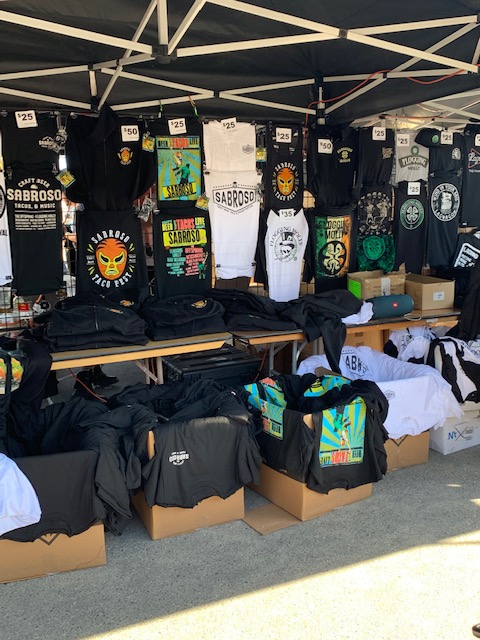 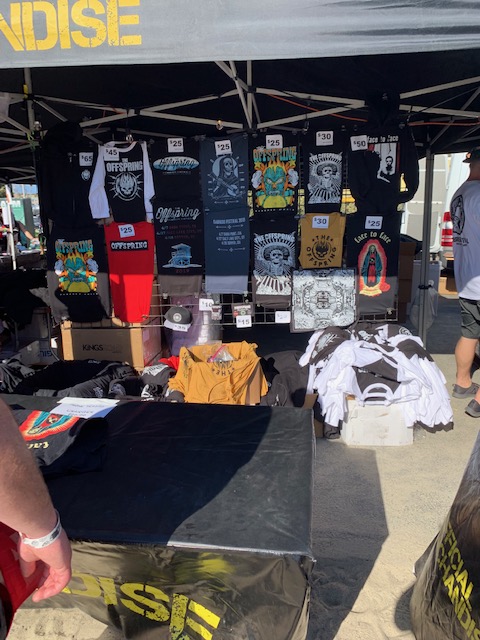 Both days were stacked with bands not to be missed. Picking just one day would have been really hard (thankfully I didn't have to). Punk rock veterans D.I. got things started for the weekend, and they did not disappoint. They brought the energy and got the crowd revved up for what was to come. Adolescents were next to hit the stage. The love for these guys runs deep in Orange County. Fat Wreck Chords' heavy hitters Strung Out were up next, they always perform with high energy, especially bass player, Chris Aiken. My favorite songs they played were “Blueprint of the Fall”, and “Matchbook.”

My personal favorite of the day, Lagwagon played next. The members of Strung Out There is something so familiar and comforting about Lagwagon. I never get bored of seeing these guys on stage. The highlights of their set, for me, were “Violins” (of course) and “Cog in the Machine.” Lagwagon closed with “May 16”, which was perfect, because it was on a Saturday.

With Bad Religion up next, a giant crowd formed and people were packed in tight. Bad Religion played at least 15 fast-paced classics, from “No Control” to “American Jesus.” Flogging Molly closed out Day One. Admittedly, I've never really been into Celtic-punk, but I'd be lying if I said Flogging Molly didn't keep my attention. The entire crowd came to life with “Devil’s Dance Floor”, and “If I ever Leave this World Alive.”

By the end of the day I'd completely drained my phone battery AND my external battery. I was relieved to stumble upon a booth by Electric Standard Company. They had external batteries available for $30, and the best part was you could trade them back for a fully charged one as often as needed. Brilliant and a live saver!

As Day One of Sabroso was all about discovery, day two was a day of opportunity. By day two, everyone had already tasted more beers than they could remember, tried a few tacos, and took a peek at the merch. Sunday was your chance to try all the beers you missed, eat any tacos you were eyeing the day before, and scoop up that rad luchador t-shirt you forgot to grab on Saturday!

Orange Blossom Special, a local Orange County band, opened on Sunday. Red City Radio, one of my personal favorites, followed. They played a few high-energy songs, including “Electricity” and “Rebels.” The crowd really came to life with these guys, dancing and singing along with their charismatic frontman, Garrett Dale. True Rivals’ Derik Envy joined RCR on bass, for his first time playing with the band.

Next up was Plague Vendor, whom I had never seen, prior to Sabroso, and they did not disappoint! Everything I’d heard about these guys proved true, and left me wanting more. With their creative, alternative sound, Plague Vendor is now on my list of new favorite bands.

Face to Face got the crowd pumped! Everyone sang loudly to favorites, “Ordinary” and “Disconnected.” Pete Parada (former Face to Face drummer, currently of The Offspring) joined the guys for “Disappointed”. Before hitting the stage, Face to Face had a poster signing at the Garageland booth. Garageland designed limited-edition Face to Face prints available just for Sabroso. The band was all smiles during their signing. It was fun to watch as they enthusiastically chatted with fans and took countless photos. 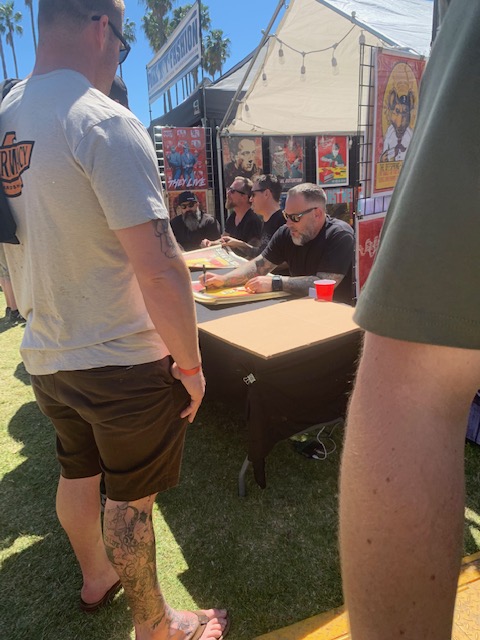 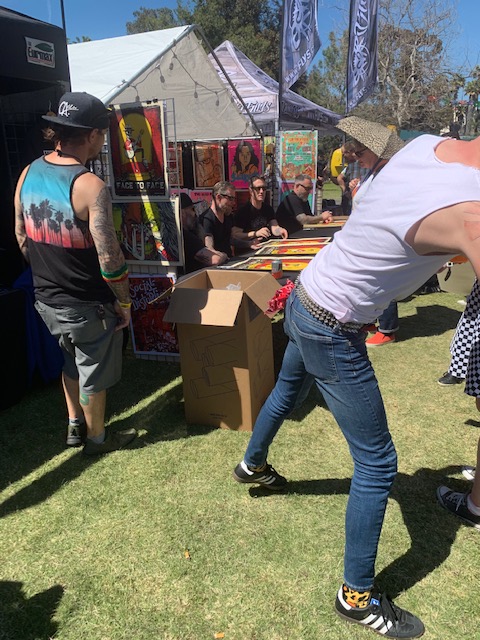 The newest Black Flag frontman, Mike Vallely (of pro skateboarding fame), tried his best to fill the shoes of the iconic frontmen who came before him (Keith Morris and Henry Rollins, just to name a couple). They took a new approach to the band’s classic sound and it was met with a mixed reaction.

I love the Descendents! For me they embody everything a classic punk band strives to be. Getting the crowd energized from the get go, Descendents opened with “Suburban Home.” Of the 20 songs they played, the standouts for me were “Everything Sucks”, “Silly Girl”, and “I’m not a Punk.” They closed out their set with “Descendents”. The proud, the few, Descendents were definitely NOT rockin’ alone tonight.

Gringo Bandito and Chronic Tacos teamed up for a taco eating challenge. It went down between Descendents and The Offspring and the crowd was completely into it! Reigning taco-eating champ Takeru Kobayashi was back and he was hungry. It was like nothing I’d ever seen. It was honestly nauseating. Kobayashi put away 157 tacos in just ten minutes, but didn’t quite beat his record from 2018 (159 tacos). Wee-man (of Jackass) presented Kobayashi with his trophy, further solidifying his place as a taco eating champion. 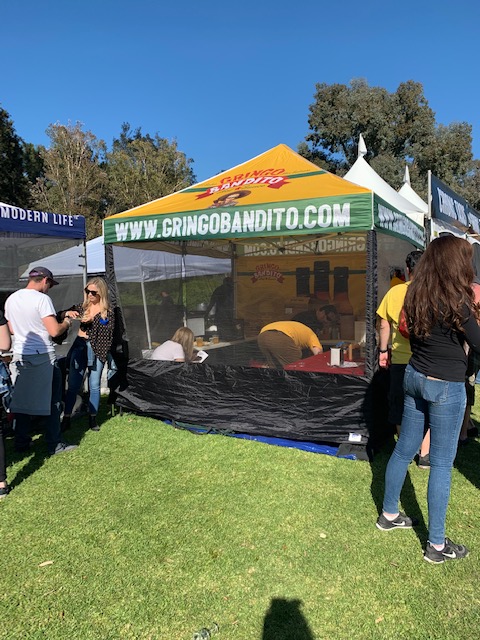 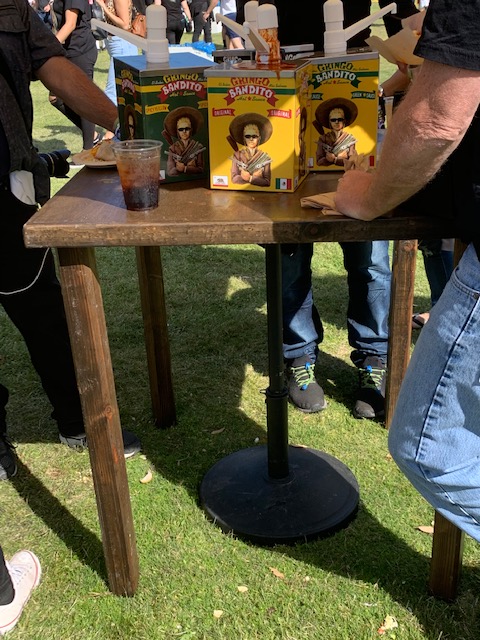 Sabroso’s closing band and event headliner, The Offspring, came on stage and illuminated the night sky. People who were passed out on the grass quickly came to life, to sing and dance to The Offspring’s catchy tunes. They opened with “Americana”, and played over 15 songs. With a set list packed full of hits, like “Come Out and Play”, “Want you Bad”, “Pretty Fly (For a White Guy)”, and “Self Esteem”, it was impossible to not sing along to every song.

Every band brought their A-game to this year’s event. It was obvious that they were as excited to be there playing as the crowd was excited to see them. All in all, Sabroso was as entertaining as it was delicious. With all the makings for a perfect weekend; music, beer, tacos, and the beach, I’m already looking forward to Sabroso 2020!

*A special thanks goes out to John Reese of SGE, Ashley Di Buduo of A12 Entertainment, Cameron Collins of Brew Ha Ha, and of course, my punk rock ladies at MABLE SYNDROME. I am honored to have had this opportunity, and hope to live and report on punk rock events for eternity.